Hello and Happy Easter to you all!

I haven’t been around the blogiverse since my eye surgery six weeks ago. I’m sort of half-finished in that respect, will be back in hospital for more surgery after the summer. Just got to be careful of the tentative scar in my eyelid I now have until then, with things like washing my face with a flannel, pulling t-shirts over my head, catching my eye with the arm of my glasses – that kind of thing. Not rubbing it, not getting infections in it. Lots of anti-inflammatories at the moment.

I have had a few projects to get on with, though. I finished editing and formatting a client’s new book – her second true-life memoir which takes up the story where the last left off. This one is is a much bigger read, made up of her travel journals at the time. It’s illustrated again, taken from her doodles and photographs. The file is much bigger than before, so while we’re waiting for the print proof copies to arrive to approve the hardback and paperback, we’re keeping our fingers crossed that any edits will actually appear, in the gargantuan document – it’s hit and miss knowing which version will actually be printed now!

I helped out on a few other books published so far this year – Freddie Omm’s cultural thriller Honour (published in the US as Honor), Sophie Neville’s Ride the Wings of Morning, and Adam Sifre’s zombie road-trip I’ve Been Deader, which I’ve been waiting to see in print only for about two years. So I asked to proof-read the ebook file, and also made him a print copy PDF as a big hint. I can’t wait until I get my own paperback now that it’s available on Amazon!

Most recently, I was invited to help out on the proof-reading and formatting of a large non-fiction book, which depended on a lot of references and internal redirections to the reader, and I could see this would be very exciting (er – okay, exciting to a computer geek like me) to bring to life by creating the bookmarks and navigational links within the text – literally hundreds of them – making the book as user-friendly as possible.

It was while doing this that I remembered a chat I had at last year’s London Book Fair with Jason Kingsley, owner of Rebellion/2000AD Comics, after a Transmedia panel discussion.

“Remember the old Livingstone adventure books, where you made choices and had to skip back and forth through the paperbacks? I was always frustrated that you couldn’t read them all the way through, cover to cover as well…” What I wanted to do, was to make an ebook you could skip sections of, if you were a busier person or wanted a shorter read, and the story would still make sense – it would just be more compact. But you could also read all the way through in the usual linear fashion, for the complete story.

Jason thought this was a good idea, and I had a few stories I was in the process of publishing already – so I decided to work on some of my other storylines, with the aim of creating this ‘collapsible story’ – one where you could read through it all at your leisure, or just tap a link to skip longer segments of literary exposition, and cut to the chase.

And then within two months I was editing and formatting freelance as my main job, had to give up my NHS post, and focus on getting established in the self-publishing world.

So the idea stewed until I had done the reference book file, and Easter break began, and things got quiet. I looked at a couple of my sci-fi projects, but they aren’t complete enough to play with. I was making a coffee the other afternoon, and the idea just came to me to try the idea out on Death & The City.

It turned out to be the perfect candidate to test out the idea. The protagonist Lara Leatherstone narrates the plot, and being a psychotic, her mind lapses occasionally into high self-monitoring mode. I could easily enable the ebook for readers wanting to stay in the action, by inserting SKIP hyperlinks at appropriate sections, taking them past Lara’s pattern-matching internal monologues and into the next segment – but leaving it so should they ever be curious as to what else goes on in that mind of hers, they can read through the whole book continuously, in the usual linear style.

In other words, as you might flip through the boring bits in a real paperback, it’s got the electronic shortcuts already in place for you. Interactive multiple-page-flipping 🙂

I had to make sure the story read in the condensed style still made sense – that I wasn’t just basically enabling the hopping-over of everything bar the dialogue. So there is still a lot of book in there – and of course you don’t have to skip every single section – depending on your mood at the time, you can skip or not skip a segment. You’ll get a slightly different read every time, depending on which parts you choose to omit on your journey, or not.

It took me longer to think up what to call the new edition, to identify it from the others already available. I asked DS-10, but she’s more interested in watching the new English dubs of Black Butler. The word ‘Interactive’ sounded more like a game. I may come up with a fully interactive version one day, but this one is something else. ‘Reading-preference enabled edition’ didn’t seem to fit on the cover neatly enough 😉

So anyway, I decided to call it as close as dammit to what it is – DEATH & THE CITY: CUT TO THE CHASE EDITION.

I hope you like the idea – let me know what you think.

Click on the photo for my author interview by Hannah Warren!

It’s been very exciting in the past month! 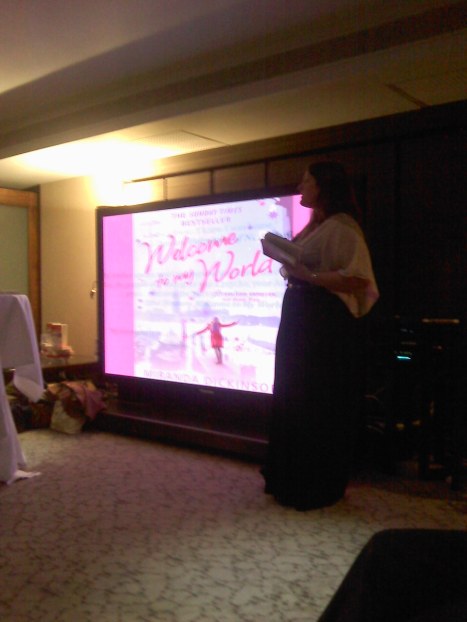 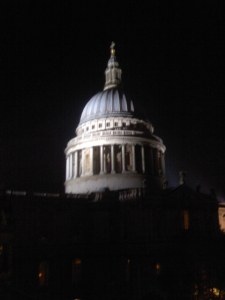 The British movie-star celebrity house-party, decadent gourmet food, books selling as quickly as they could be handed out (Sophie Neville, Funnily Enough – whose childhood pets even stole the screen, on shows such as Animal Magic and All Creatures Great And Small): 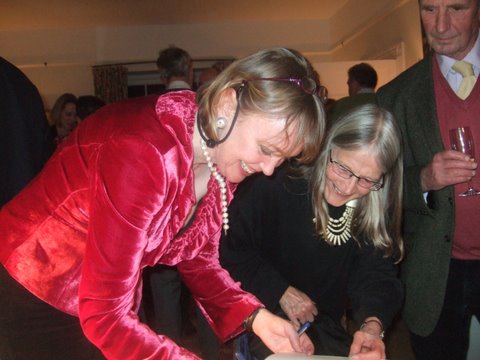 And the intimate Oxford bookshop in steampunk fancy dress, great company, cups of tea and beer, open to the very friendly browsing public (Eight Cuts presenting both myself and Raven Dane reading from our books):

What I’ve learned from this is that there’s no wrong way to go about it. Whatever your budget, whatever your intentions, and whatever your personality, you can have a book launch or live event to suit you. Whether it’s busking on the street fielding the heckles, or gold-leaf invitation-only, Gucci dark glasses and red carpet compulsory – a book event is memorable. It puts a real person, the author, behind the world of the imagination.

Today I’m having another book promotion event of my own – online. I don’t have a pet celebrity, but I can give away free books for all you Kindle appsters!

If you miss today’s promotion – never fear. There’s another longer free listing, 48hours, for both Kindle ebooks again on Christmas and Boxing Day (time from midnight to 23:59 PST, or starting about 08:00a.m. Christmas Day GMT). So if you get a Kindle for Christmas, you know where to find a pair of good chunky free reads to get you started!

And if you can’t get yours working on Christmas Day – don’t panic! Both ebooks will be FREE again on New Year’s Day and January 2nd 2012.

And if you miss any of the free promotions, all hope is not lost. You can still buy the 2-in-1 version (plus bonus feature screenplay) DEATH & THE CITY: HEAVY DUTY EDITION for only 0.86p/0.99c.

You can read the blurbs on my eBooks page above.

I wish I could be there to give you a sample reading in person, so to make up for the loss of laughs and chat, here’s a couple of tasters…

DEATH & THE CITY: BOOK ONE

(Also on Amazon Kindle UK/DE. Paperback available from Amazon US, or Shalini Boland)

Went out for a birthday lunch today to meet the effortlessly fabulous Shalini Boland, rising Young Adult fiction star and author of Hidden, and the forthcoming futuristic/dystopian novel Outside. We did a book exchange – I got a paperback copy of Hidden (paranormal/vampire romance), and I gave her a hardcover of Living Hell, and threw in a paperback proof of Death & The City: Book Two to follow up the first one she already has at home. I told her about my own ‘challenge’ I’d set myself, to write a romantic novel à la Harlequin/Mills&Boon, and she shared some of the promoting tips she’s learned around indie publishing.

One of the things she’d heard about is running temporary freebie promos on eBooks. I thought this sounded like a fun idea. She also submits queries to book blogs for reviews/interviews and promotion, and is doing well out of it. In comparison to me, who hasn’t put together a press kit at all, and sells on average one Terrible Zombie Of Oz per week, she’s proof that marketing yourself a bit in the right places can definitely work.

I’d already dropped my Amazon Kindle prices, having bought an Android-based eTouch Toys’R’Us tablet (it’s fantastic, and has the added bonus of a rounded shiny silver rear cover that looks as though you’re perusing the inside of a tiny Smeg refrigerator – and almost as heavy). I realised that for my £49.99 investment in this electronic toy, and downloading the free Kindle app, what I mostly wanted was to benefit from amazingly cheap books.

So I’d swallowed my pride and put my own prices down, from a few bucks to amazingly cheap as well.

When I got home I checked out Smashwords, and had no new activity in the last month – but noticed they were running a July sale list, with vouchers which you could apply to your books to make them either discounted or free. So I signed both of my Smashwords epub/html/LRF/RTF format books up to it (Apple/Sony/Nook etc versions), and almost instantly sold two, and then two more. It was definitely worth doing – as it’ll be a while before I see any royalties anyway, gaining a readership in the meantime is definitely up there in my list of preferences.

I’d already decided to give myself a year, from publishing the first two in the Tales of the Deathrunners series (Death & The City: Books One and Two – combined in the hardcover edition, and in the Heavy Duty Edition eBook, which also includes an original feature screenplay), as well as Living Hell and The Terrible Zombie Of Oz. One year will be enough to gauge reader interest in whichever sequence of books is likely to be strongest – at the moment it looks like the title containing the most Z’s is winning – and I have sequels already in progress. In the meantime I’ll work on giving this Romance Fiction challenge a shot, and try and keep the zombies at bay – until appropriate for them to be unleashed 🙂